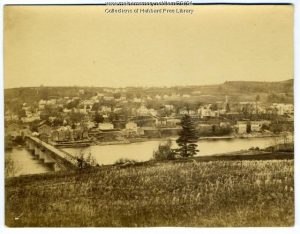 The story of Hallowell is the story of America, with science and industry – and not infrequently the weather – dictating the pace of growth, the accumulation of great wealth, and the loss of vast fortunes. The City is named for Benjamin Hallowell, a Boston merchant and one of the Kennebec Proprietors, holders of land originally granted to the Plymouth Company by the Btitish monarchy in the 1620s.

First to settle here was Deacon Pease Clark, who emigrated with his wife and son Peter from Attleborough, Massachusetts, in the spring of 1762. Legend has it that after disembarking on the west side of the Kennebec, near present-day Water Street, the Clarks took shelter in their overturned cart. On a riverfront lot measuring 50 rods (about 275 yards), the Clark family raised corn, rye and other crops. The land on which the fire department now stands was the first to be cleared. Today, the City’s population (2,467) is only slightly smaller than it was in 1820, the year Maine seceded from Massachusetts and became a state in its own right. Yet 183 years ago, Hallowell’s inhabitants enjoyed the services of 71 stores along Water Street ( by contrast, Augusta had a population of 1,000 and just 20 merchants). Thriving industries included ship building ( between 1783 and 1901, 50 ships were launched from Hallowell’s wharves ), trading, publishing and logging. Two grist mills, five sawmills and two slaughterhouses served the needs of residents near and far.

In 1815, the first granite quarried near the Manchester town line signaled the birth of an industry that would support Hallowell until 1908, when cement displaced stone as the construction material of choice. In 1826, the ice industry began in earnest, employing thousands over the next 75 years. Frozen blocks loaded onto Hallowell’s schooners travelled as far as Cuba and the West Indies. Other local products exported via the Kennebec ( and, after 1857, by train ) from Hallowell included sandpaper, textiles, rope, linseed oil, oilcloth, wire, books and shoes.

While the Kennebec River sustained the City from its inception, this mighty freeway also inspired fear. Spring floods terrorized shopkeepers and sometimes brought commerce to a standstill. Worse still, citizens eager to cross the river and unwary children skating and playing too far from the riverbank lost their lives when ice turned out to be thinner than it looked. The cold wreacked havoc in other ways, as well: On July 9, 1816, a freak frost destroyed crops and forced hungry families to sell their farms for half their worth. 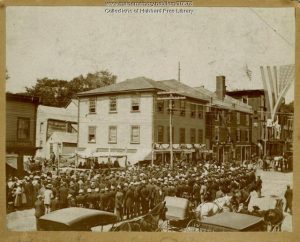 Through good times and bad, however, Hallowell remained a center of learning and of intellectual accomplishment. Private academies and music conservatories attracted students from across the state. Publishers eager to join in the city’s lucrative book trade migrated here, as did chemists, physicians, politicians, artists, and inventors ( Maine’s first automobile came from Hallowell, as did the first practical threshing machine). Today, a walk through Hallowell’s mansion-studded streets provides clues to America’s past, and to a world all but vanished.

You can find out more at HistoricHallowell.org or at our site at the Maine Memory Network.

Hallowell historian Sam Webber will conduct a waterfront tour starting at the Hallowell boat launch at 1 pm and ending at Granite City Park at about 3 pm.  The illustrated tour will cover two hundred years of Kennebec River commerce from the Joppa section of lower Hallowell to Hinkley Point.